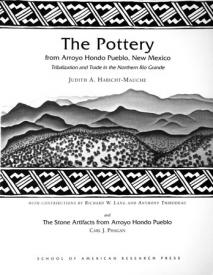 This monograph demonstrates how archeological ceramic analysis could move beyond reconstructions of chronology and site history to provide a clearer understanding of the structure and organization of prehistoric societies. Building on an exhaustive study of the mineralogical and chemical analyses of the pottery from Arroyo Hondo Pueblo, the volume considers the range of stylistic diversity in the ceramic collection, an account of the origins of pottery manufacture, and a report on changes in the relative frequency of ceramic types through time.

This monograph presents a model of cultural change for the period between A.D. 1250 and 1400 in the northern Rio Grande, based on an analysis of changes in pottery style, production, and distribution at Arroyo Hondo Pueblo. According to this model, northern Rio Grande inhabitants used stylistic diversity, as manifested in the proliferation of local white ware styles after about 1250, to structure social relations and promote stability and predictability of interactions between competing ethnic groups in an increasingly complex social landscape. Subsequently, the centralized production and widespread trade of glaze-painted pottery acted to sustain a system of complementary and reciprocal interactions that linked these various ethnic groups into a single, integrated “tribal” network by the end of the fourteenth century.

Along with revealing something about the basic nature of culture change in the Rio Grande area during the Rio Grande Classic transition, the analysis of ceramic collections from Arroyo Hondo Pueblo provides a deeper understanding of the changing structural role of ceramic stylistic diversity in the emergence of these new social and economic networks.

Reviews for The Pottery from Arroyo Hondo Pueblo, New Mexico: Tribalization and Trade in the Northern Rio Grande

1994 Review of The Pottery from Arroyo Hondo Pueblo, New Mexico: Tribalization and Trade in the Northern Rio Grande, by Judith Habicht-Mauche. Kiva 59(4): 481-482.

2001 Analyzing and Interpreting Ceramic Production and Distribution in the American Southwest. Reviews in Anthropology 29(3): 253-272.

1994 Review of The Pottery from Arroyo Hondo Pueblo, New Mexico: Tribalization and Trade in the Northern Rio Grande, by Judith Habicht-Mauche. Choice March 1994: 394-395.

1996 Review of The Pottery from Arroyo Hondo Pueblo, New Mexico: Tribalization and Trade in the Northern Rio Grande, by Judith Habicht-Mauche. Ceramica 55: 78.